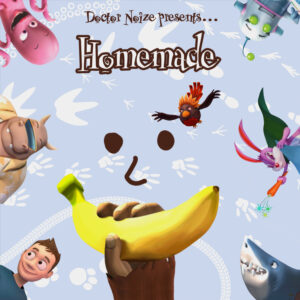 A musical adventure bound to get you on your feet in a trying time,

AN INSPIRING AND FUN COLLECTION OF SONGS AND STORIES

HIS MUSIC INDUSTRY FRIENDS AND FAMILY, FROM FAMILY MUSICIANS TO OPERA STARS, LOCAL FAVORITES TO GRAMMY®-WINNERS, HIS DAUGHTERS TO HIS HEROES.

LONE TREE, CO (Sept. 8, 2020) – Doctor Noize fans listen up! The Doc has released a quarantine-inspired album to lift spirits in these times.

Homemade is an inspiring hour of togetherness and learning by Doctor Noize and his music industry friends for kids and families at home in these times. The Doc and his family call friends from home to build relationships, creativity and purpose through writing and singing songs together.  It’s an album that is sure to have you singing along and even making your own music videos at home!

100% of Homemade’s profits will be donated to its three core causes of pandemic relief (MusiCares COVID-19 Relief), environmentalism (EDF) and free online learning for kids in these times.  Additionally, Doctor Noize announced that all of his previous albums and illustrated books will be available free online to everyone until a vaccine is available to all.

Headliners on Homemade include Grammy® winning artists Joanie Leeds, Jon Samson, Lucy Kalantari, Secret Agent 23 Skidoo, Tim Kubart, Isabel Leonard, Nathan Gunn plus Doctor Noize (the alter ego of composer/performer Cory Cullinan) and many other acclaimed and Grammy®-nominated singers and instrumentalists from pop to classical. They recorded and produced a track a week for six months, often releasing them with videos online. It became an album about what it was: the Doc calling friends and family to make music and connect from afar.

The project immediately spawned a national hit on NBC, Fox, CBS and Sirius/XM with its opening single Stay At Home, with the funny and timely environmental song Positive Energy! featuring a united chorus of 25+ children’s music stars right behind it. Homemade then takes a virtuosic journey through music fundamentals, multiculturalism and genre as Doctor Noize characters play their own version of his #1 national hit song Banana. It closes calling upon kids, families and classrooms to make heartfelt homemade creations of their own.

The album starts with Stay At Home, the upbeat single the Doc’s family sings together aired on TV. The catchy melody and epic harmonies Doctor Noize and his family perform combine to convey the message of being stuck at home, yet still staying connected and making the most out of every day. Then the barbershop-style Gotta Teach Others to Enjoy Life brings a positive outlook on life with its fun backup vocals and snaps to accompany funky horns and guitar.

Opera Superstars Isabel Leonard and Nathan Gunn are called in to add their powerful voices to Bunnies, Bunnies, Everywhere! and Get Away. Leonard sings a hilarious song about the fun of hunting for Easter eggs, but with a twist -- the dads come in and try to take the Easter Eggs for themselves! Gunn sings a duet with Doctor Noize about the triumphs and failures of being a parent in quarantine with kids stuck at home, a fun-filled song with an even more hilarious music video.

Make sure to check out Positive Energy! for a high-octane environmental wake-up call about the importance of finding some positive energy for the planet. Doctor Noize called in 25 family musicians from across the country to collaborate, and the result is an inspiring musical adventure that takes the listener on a roller coaster of sounds and voices.  The first half of the album closes with the scaled-down and introspective Straight From The Heart (a duet with 2019 Grammy-winner Lucy Kalantari) and the heartfelt solo song We Make The World We Live In.

For the second half of the album, Doctor Noize calls Phineas McBoof and his beloved International Band of Misunderstood Geniuses to take a tour through music fundamentals, genre and diversity.  Characters perform their own versions of Doctor Noize’s #1 National Hit Song Banana.  Each one is unique and showcases a new genre of music, from the epic disco-tacular Big Bold n’ Beautiful Banana Discotronica, to Lenny Long Tail’s recreation of classic country fiddle rock with Country Banana Hoedown Showdown, to the swingin’ Ella & Louis inspired The Monsters’ Lounge (Smoooth Banana).

Cory Cullinan holds degrees in Music and Political Science from Stanford University, where he graduated with Distinction and Honors, and he’s about to earn a Masters in Recording Arts.  He’s a member of the Recording Arts Faculty at University of Colorado Denver (school year) and Stanford University (summer sessions), and owns a 5-room production and teaching facility Reach Studios. During five years as a high school music teacher in Silicon Valley, Cory conducted youth choirs to major awards and taught a music history elective that became so popular it was made a required freshman course. In 2006 he released the original The Ballad of Phineas McBoof, and the rest is history!

Homemade will be available at all major digital retailers and on the Doctor Noize Online Store linked here.

For all ages, and especially suitable for elementary school children and the adults who belong to them

Gotta Teach Others to Enjoy Life

Straight from the Heart

We Make the World We Live In

Rythm with Backbone the Octopus

Structure with the Opera Guys

Genre with Riley the Robot

The Lowdown with Lenny Long Tail