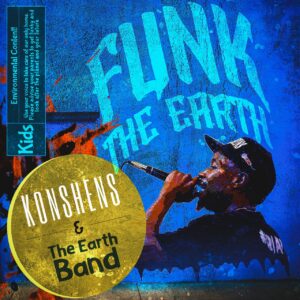 WASHINGTON, DC (Sept. 3, 2021) –  Kids!  Parents!  Teachers!  It’s time to FUNK THE EARTH — living by a groove that feels so much like dancing, you’ll hardly know you’re also saving the planet we all love and live in.

Fronted by Konshens The MC, Funk The Earth is precisely what it inspires others to be — a multi-racial, international collaboration between people who share a common goal to preserve the world and make it an even better place.  Brought together by a common love of exquisite production values and a passion for the world we live in, the production is the joint effort of songwriters and producers Konshens The MC, Ricky Kej, Lonnie Park and Doctor Noize.

Grammy®-winning musician from India Ricky Kej is known globally as a UNCCD Land Ambassador and UNESCO Global Ambassador for Kindness.  Producer Lonnie Park has been touring and working with Ricky for the last six years at music festivals and stadiums, and they performed together at the United Nations Headquarters in New York and Geneva.  Ricky and Lonnie first collaborated with Konshens The MC through the United Nations Convention to Combat Desertification when Konshens was brought on board to create a hip hop version of their Land Anthem.  Ricky and Lonnie were huge fans of Cory Cullinan, who is also known as the chart-topping children’s musician and musical theatre composer Doctor Noize.  All three were impressed with both Konshens’ passion for the cause and his ability as a teacher and workshop leader for kids, which combined with his gift for poetry and performance made him the perfect messenger for the songs they wanted to bring the world.

Over the course of a year, the four musicians brought songs to the table for the album, presenting them to the group to add their collective musicianship, lyrics and concepts.  The result is a true collaboration and meeting of hearts — a celebration of the earth and its people.  Funk The Earth proves we can all have fun toward a valuable common cause together — in music or sustainability, doing the best work is also having the most fun.

The album’s lead single and video Positive Energy — penned by Doctor Noize and Konshens — was chosen because it expressed the joy with which Funk The Earth was made.  The beauty of family and collaboration is emphasized on the track as Konshens’ son Nathaniel, Doctor Noize’s two daughters, and 25 children’s music artist peers — including 5 of the last 6 Grammy® winners in the Best Children’s Album category — add their voices to a simple message at the heart of the album.

The album’s second single and video, Born From The Land, features guitar by Doctor Noize, flute by Grammy®-winner Wouter Kellerman, and guest vocals by Africa’s Mzansi Youth Choir and Senegalese legend Baaba Maal, who sang the gripping Wakanda vocals on the Black Panther soundtrack.  It’s an irresistible celebration of the connection between humanity and the land from which we were born — the land to whom we are stewards.

The album’s third single and video, The Sun Rises In Your Eyes, continues to emphasize the inspiring impact of children and family, featuring lead vocals by Doctor Noize’s daughter Riley playing off the sophisticated rhymes and rhythms of Konshens’ rapping.  Adding to the playful percussion is India’s virtuosic Arun Kumar on vocal percussion, Ricky’s keyboards, and Lonnie’s electronica production, creating a family-friendly, multicultural, multi-genre experience to immerse every listener, from children to children at heart.

Further adventures — many with their own videos — include Armand Hutton’s uplifting a cappella arrangement in ShineYour Light; the soulful It Only Takes A Smile with Grammy®-winning keyboardist Daniel Weatherspoon; children’s Grammy®-winner Lucy Kalantari playing off Konshens on the gender-busting anthem She Can Do, He Can Do; Lonnie’s heartfelt singing on Something Amazing; Grammy®-winner Wanz funking up Funk The Planet; the environmental anthems No Plastic Trash and Take Back The Climate; the percussive hip hop of Our Carbon Footprint and horn-section reggae of CO2; and Doctor Noize and Konshens closing the album with the retro Let Me Sing Along.

Most importantly, listeners of all ages will be inspired to take action without even realizing it by an album that deftly balances musicianship with childlike wonder.

Funk The Earth is now available at all major digital retailers and at the Funk The Earth Online Store.  For all ages, and especially suitable for elementary school children and the adults who belong to them.

Positive Energy (feat. Family Music All-Stars)
Born From The Land (feat. Baaba Maal)
No Plastic Trash
Funk The Planet (feat. Wanz)
Take Back The Climate
Shine (feat. Armand Hutton)
She Can Do, He Can Do (feat. Lucy Kalantari)
The Sun Rises In Your Eyes
Something Amazing
Our Carbon Footprint
It Only Takes A Smile (feat. Daniel Witherspoon)
CO2
Let Me Sing Along