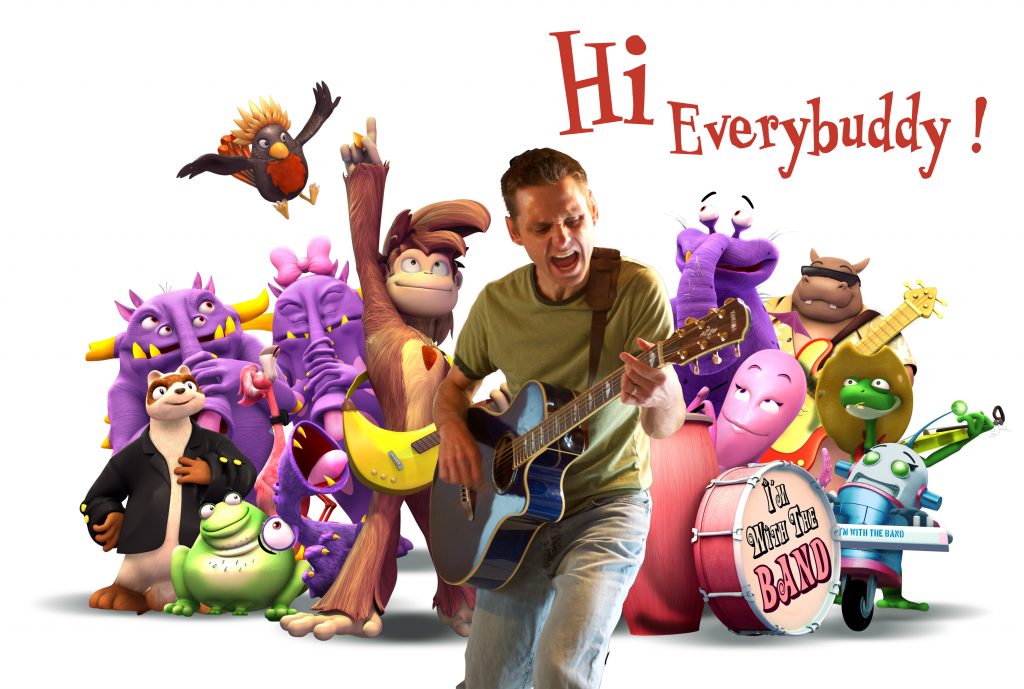 This joyous anthem the Doc wrote, packed with Grammy-winners & stars, hit #1 on the Hottest Family Music Chart at the end of 2021!

Konshens The MC takes you on a 5-minute star-studded Album Tour of his new collaboration Funk The Earth with Doctor Noize & The Earth Band.

Shine, the latest single & video from Funk The Earth by Konshens & Earth Band, rocketed to #4 on the national Sirius XM Kids chart this week.

This Big Boy and Mozart have graced the desk of every studio I've ever had, in honor of Mark Van Horn, the man who introduced me to both the recording studio and my wife. Mark and I recorded my first album -- and his -- in an 8-track analog studio we put together in the Janitor's Closet of the apartment complex his father managed when were at Los Altos High. His father funded the gear, and we produced each others' albums together, often ending 15-hour workdays of pure joy by watching Letterman before I went home.

Mark also introduced me to his friend Janette Sampson, coming to visit her and swinging by my Stanford dorm room to visit both of us at once while he was on campus. She has been the center of my life ever since, so Mark is the inspiration for both my personal life and my career. That, and his endless supply of positive energy, is a pretty spectacular contribution to make to another man’s life.

Incomprehensibly, given my brother's similar story, Mark died of a brain tumor in his mid-twenties six months after his son was born — a son who’s grown up to be a wonderful musician like his dad. But Mark is with me every day I write or record anything here at Reach Studios, watching me with that irrationally beautiful optimistic grin that he and Big Boy have in common. Back in the day, we shoved a toy skateboard into Big Boy's belly like the alien from Alien, a screwdriver up his butt, and gave him nail earrings, ‘cause, well, you know… We were 17. BB remains adorned with these items to this day, never losing his smile, weathering the storm with a positive mentality, just like Mark and Tracey did.

I never record anything at Reach Studios without thinking of Mark and the impact he had on my life, professional and personal. He was a Positive Energy Machine — anyone who knew him will tell you that — and he will make a surprise appearance as a guest artist on the Doctor Noize retrospective album someday, because he never lived long enough to release a professional album of his own, but he would have, and he honestly appears in spirit on every album I've ever made... so it's time to give him his due.

Have a great one, and remember that Big Boy loves you no matter what you do to him, and feels completely secure with himself even when standing beside Mozart for life -- a good lesson for all of us. ... See MoreSee Less

This was just sent to me by my daughter Riley's high school choir director Rob Lane and brought tears to my eyes. It's a late night rehearsal last night by Colorado's All State Choir at their hotel in Denver before their concert at the famed Buell Theatre this afternoon. It's a piece about young Pakistani education rights advocate Malala. Riley is one of the masked bodies you see here. Get livestream or in person tickets at the link below. ... See MoreSee Less

We're grateful that two of our Konshens & The Earth Band songs -- “Let Me Sing Along” and "Born From The Land" -- were included in Spotify's Editor's Choice ToyBox Playlist of "Essential kids songs to add to your family's collection." I wrote, sang and played stuff on "Let Me Sing Along," and played guitar on the wonderful "Born From The Land." Have a great weekend and sing along! ... See MoreSee Less